This forum is for discussion pertaining to homebrew and indie software for the Dreamcast, such as homebrew games, emulators/interpreters, and other homebrew software/applications. Porting requests and developmental ideas are not to be made here; you can make those here. If you need any help burning discs for homebrew software, this is the place to ask as well.
Post Reply
61 posts

You guys wouldn't have any updates on this would you, or maybe even a demo for people to try?

Stryfe wrote:You guys wouldn't have any updates on this would you, or maybe even a demo for people to try?

Demo, no, but we are getting ready to make a huge update and launch a new Youtube video.

We rewrote the engine from scratch, and we're pleased to announce a bunch of really cool features (all running on DC, PSP, and PC). I'll post here with the video when it's complete.
Elysian Shadows - "Next-Gen" 2D/3D RPG coming to Sega Dreamcast, Steam, OUYA, and Smartphones

Looking forward to your next update

Looking forward to this, looks like you got a great team!
Dreamcast, it's still thinking.

So it has been 8 long months since any of you have either seen or heard from us on Youtube. Despite popular belief, this is not due to the fact that we have given up on Elysian Shadows or were ceasing development. The truth is that we have been working our asses off for 8 months, rewriting an entire engine, and doing more work in the time period than the entire Adventures in Game Development Series combined.

Elysian Shadows Revolution 1 was our experiment at trying to introduce more than just the software aspect of the game development process to the videos. In episode 2, we try to build on this idea and incorporate the entire development process. At the same time, though, we have made a conscious effort to return to our roots established in the Adventures in Game Development Series. ESRev2 has been in the making for 8 months, and tries to appeal to all audiences. Please watch with an open mind.

The engine has been rebuilt from scratch. It has officially reached the point of functionality that the previous one had and then much more. New features displayed in the video include more powerful Lua scripting possibilities and rigid body dynamics. Hopefully future episodes will be focusing more on game design aspects of programming such as the battle system.

LibGyro--our multiplatform back-end--is effectively complete. Elysian Shadows runs on the PC, Dreamcast, and PSP and will continue to do so until its release. LibGyro offers higher level C/++ engine programmers (Kendall) and Lua scripters (Peter) a complete layer of abstraction from the hardware, so that the Elysian Shadows engine may be developed independent of platform.

Yes, Marcel is back on the team. Due to the fact that he seriously rejoined about a week before this video was produced, he has nothing really to show off. He is going to be designing his own Elysian Shadows "toolkit" that will be demoed in videos to come.

Pritam and Kendall both have been contributing greatly to the artistic area. Pritam has been designing and pixeling our starting area and working on various characters. Kendall has been busy concepting and pixeling enemies.

Cypher--our previous sound composer--has rejoined the team. His talent was truly missed, and we have decided to join forces once again. He has since composed several of his finest tracks to date.

The Elysian Shadows team is looking to recruit new blood. We are particularly interested in the areas of pixel art and web development. If you are interested in joining our team, please contact me (or another team member) on Youtube for the forums.

We would like to sincerely thank everybody much for the continued support and faith in our project even though you haven't seen us for all these long months. We are going to be working harder to ensure that the next video will not take this long. 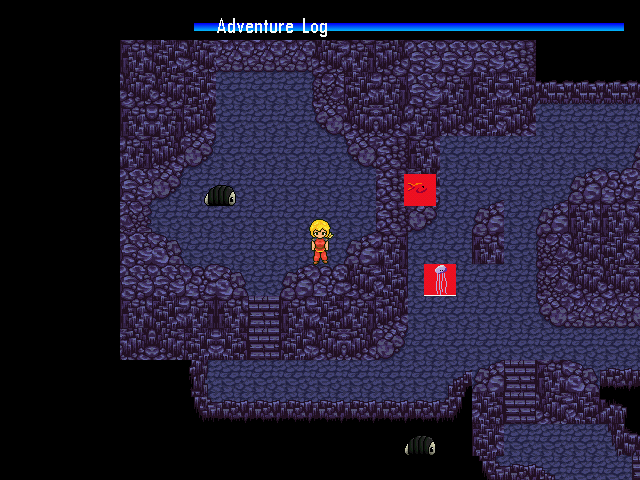 Please ignore the red blocks. Those were just dumb little things that I threw in to test the Rigid Body physics engine. That's what happens when it's the programmer taking the screenshots.
Elysian Shadows - "Next-Gen" 2D/3D RPG coming to Sega Dreamcast, Steam, OUYA, and Smartphones

Seems to be a very interesting game! It looks a bit like those old RPG Maker games.

What would be the object limit on screen before it starts lagging?
Top

Our bottleneck is either going to be on physics processing or Lua scripting.
Elysian Shadows - "Next-Gen" 2D/3D RPG coming to Sega Dreamcast, Steam, OUYA, and Smartphones

Our bottleneck is either going to be on physics processing or Lua scripting.

Lua scripting can slow things down considerably. That's one of the things that I came to realize when I was still working on ljsdcdev RPG (when I moved EVERYTHING to being done in scripts).

Also, I'm glad to see someone other than me is actually using the PVR sprites for something in recent code.

Actually, I think of ljsdcdev RPG sometimes when I'm working on the DC build and wonder how you did similar things.

I have no doubt that Lua is going to be the bottleneck in the end. That's why I'm kind of working my hardest to keep frame-by-frame "polling" to a minimum and set up some kind of more efficient triggering system to call Lua. The hardest part is to make the triggering stuff versatile and powerful enough.

But to be honest, I'm totally willing to either wind up moving some of the Lua functionality to C++ in the engine (maybe common scripting tasks) or do some kind of optimization. I'm much farther along in my computer engineering degree than I was when I first started, and I feel much more comfortable working at a lower level and doing things with hardware.

At the moment, I'm more worried about the PSP, though. I'm definitely a lot more accustomed to doing things on the Dreamcast, but for the time being the performance of the Dreamcast build totally blows the PSP out of the water.

I must say PVR performance on KOS is quite good indeed, we are making a new engine with sdl like functions, and it's looking good.

Is it much better than the old TA api? I never worked with it actually...
Top


Elysian Shadows Youtube wrote:So after a year and a half, the Adventures in Game Development finally returns with Chapter 17. The team has spent quite a bit of time with Tyler, James, and Jarrod coding all night, abusing caffeine (and beer), and pursuing our passions. It is with this spirit that we finally feel comfortable resurrecting our original series in all of its crude, uncensored, game development goodness.

Please welcome Tyler Rogers to the Elysian Shadows team. He will be contributing to the SDK in the form of scripting (and quality assurance, haha) as well as storyline development.

Please welcome Dual-Threat studios to the Adventures in Game Development. We are extraordinarily pleased to be working with such talented, passionate, and driven individuals. We also think that they will help spice up AiGD and prevent Marcel and Falco from drawing you guys in our technical mindfuckery.

On the ES front, the team has gone rogue and is now supporting Apple products with its engine/SDKâ€¦ along with Windows, Dreamcast, and PSP.


Marcel has launched a brand new "Toolkit" for the ES SDK written in C++ and using QT. With this new toolkit, the engine and editor are able to share a code base for asset loading. This framework is called the "Joint AssetIO Framework." We are also introduced to the mechanism for capturing debug output of critical loading/saving routines within this framework.

Team Dual-Threat introduces our viewers to the Unity3D engine as well as its component system (along with a comparison to a hierarchal approach). They also show off two of their productions: Prime8 Shooter and Prime8 Racing. Finally, they unveil their most secret of projects "Project Root" at 5AM â€¦ and fall asleep.

Am I the only one who cannot watch the first video ?! - It says "This video is not available."

stoked to see more videos! I'll be watching them tonight.
*The Cadillac of signatures*
Top

Phoenix Downing this bitch. We released a bunch of new videos not too long ago (Chapters 18-20) for those of you who haven't seen them.


We are also trying out a much more open development paradigm by posting things as we work on them via our blog (rather than waiting months to release a video). We posted a big-ass blog update the other day about integrating our Toolkit with dc-tool IP for seamlessly debugging/creating levels on the Dreamcast. Some of you DCers may be interested in reading about this. We're trying to incorporate all external debugging tools within our Toolkit, so that they can be invoked with the click of a play button... Hopefully this will allow artists to concentrate on art and level design and not have to worry about using a bunch of command-line tools every time they want to test on an external platform... 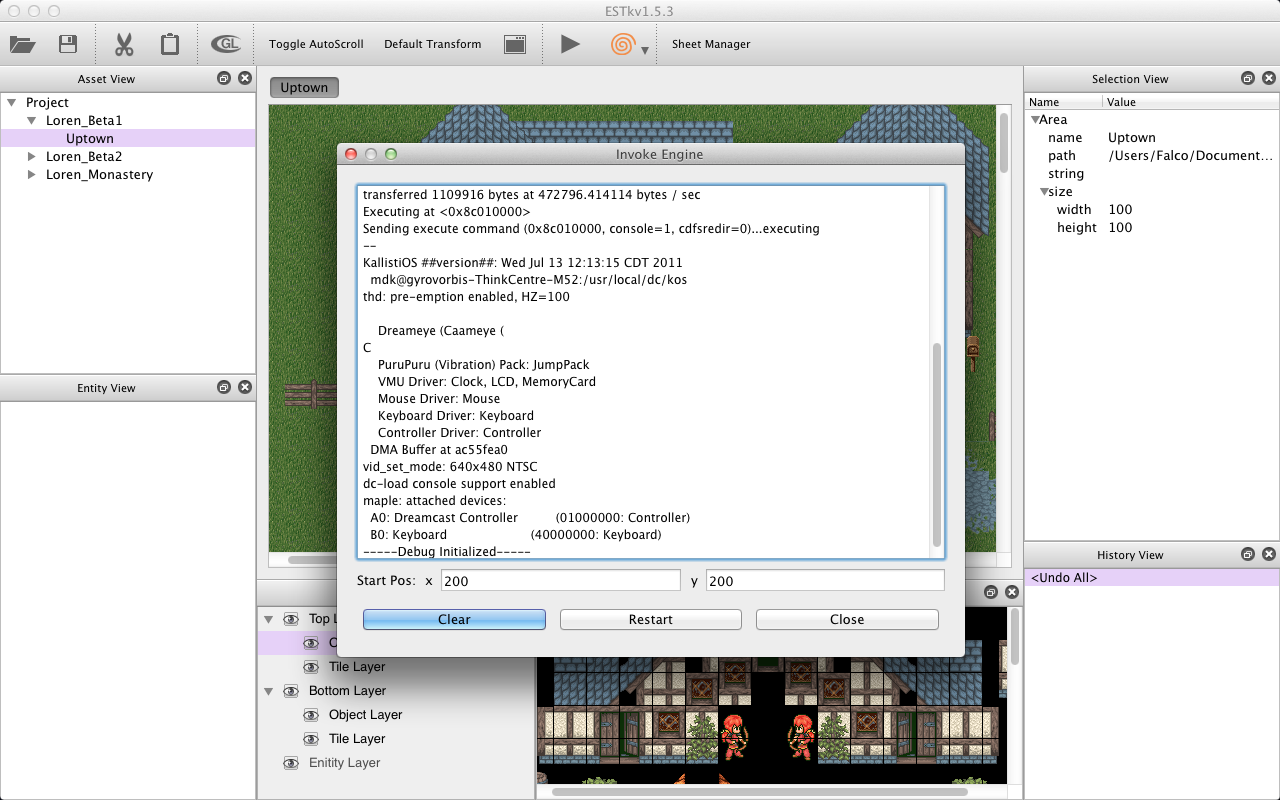 Sending the engine + assets to the DC from ESTk with the click of the play button (once DC-Load has booted, and the DC's mac/IP have been entered into ESTk). 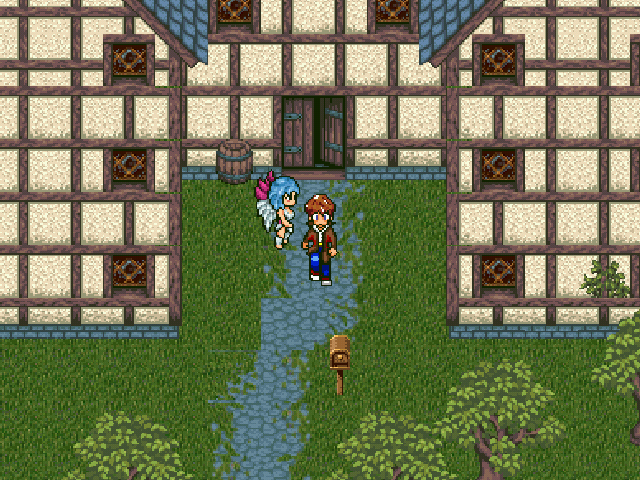 Engine running on the Dreamcast: Playing through the level as we create it.

And here is a post I made regarding our latest article (released yesterday):

me wrote:Apologies for the lack of updates, I have been suffering from severe obstructive sleep apnea that has kept me tired and miserable for the last month or so...

Anyway, I'm getting back on my feet, and I finished a pretty gigantic feature for ESTk (it's more like a standalone tool, technically) in our development suite. It's called "Sheet Manager," and it allows artists and level designers to dynamically populate tile sheets from existing graphics (rather than having to meticulously construct a grid of graphics by hand in Photoshop). 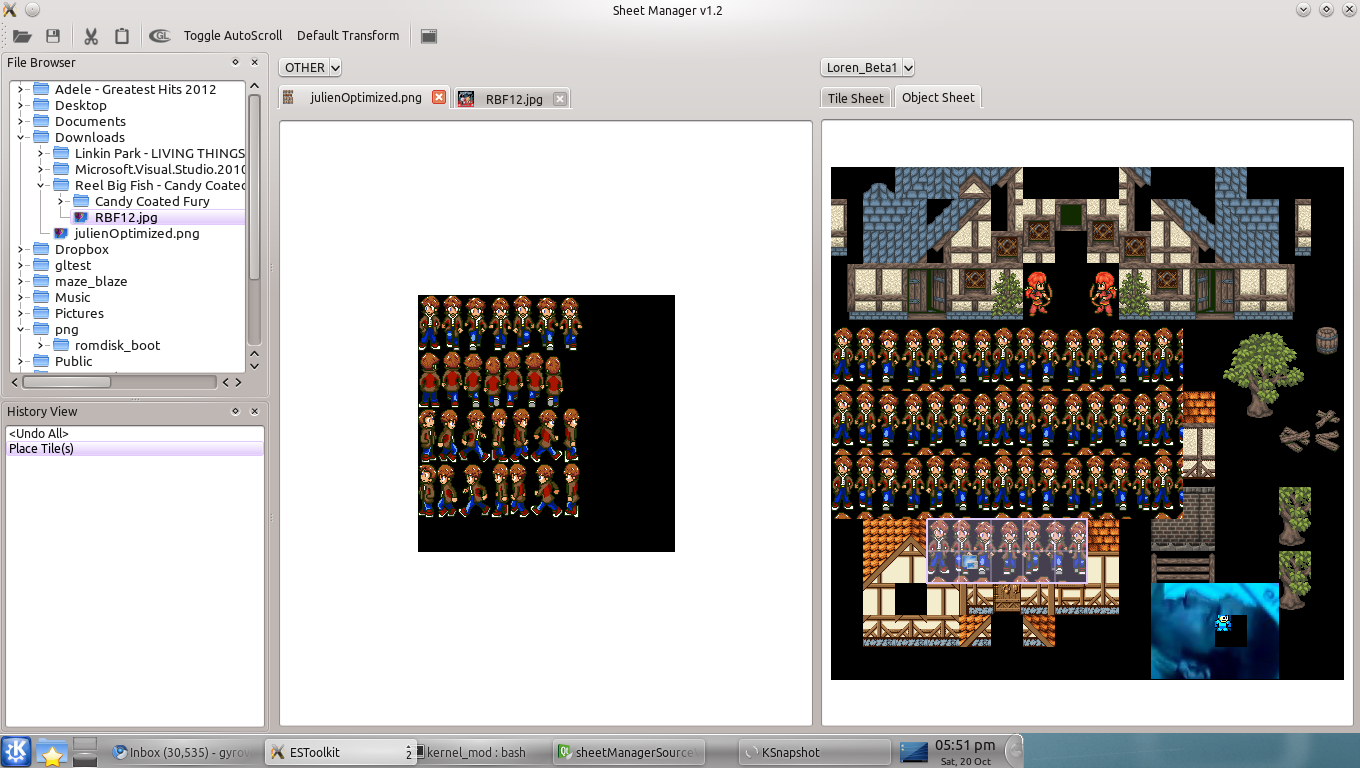 It was definitely a slight detour from the game itself, but I needed an entry point back into it after enduring a month or two without sleep, and this is something our artists have been begging me for for months...

Looking forward to updating this topic and getting our asses back to work...
Elysian Shadows - "Next-Gen" 2D/3D RPG coming to Sega Dreamcast, Steam, OUYA, and Smartphones

Haha looks like fun guys, it is inspiring to see such a team!
Keep up the good work and good luck on your project.
Top

Thanks guys! We really appreciate it.

We just released an internal document used for pixel artist recruitment. The document has been circulated to give prospective artists a look at the artistic direction of ES and an introduction to our development suite. I doubt there are too many aspiring pixel artists here, but just in case: 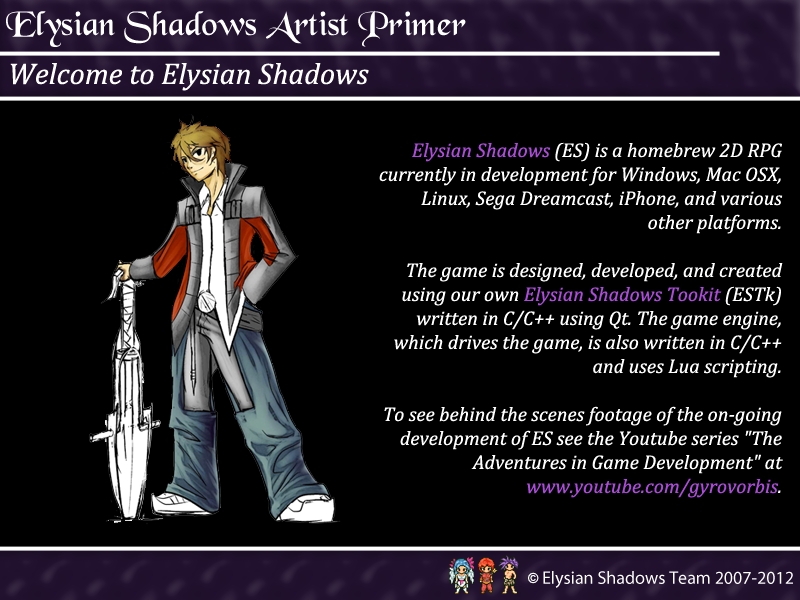 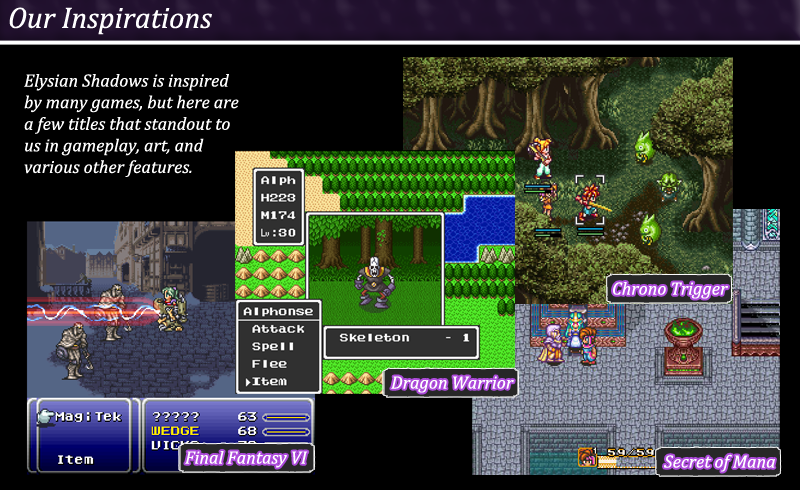 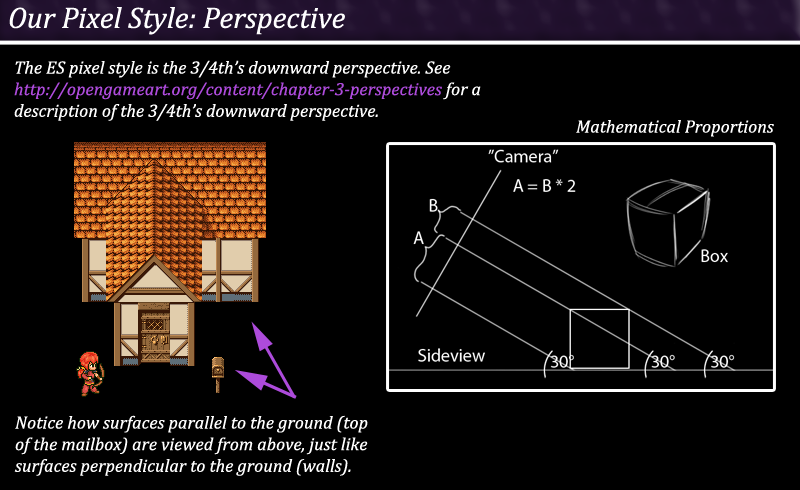 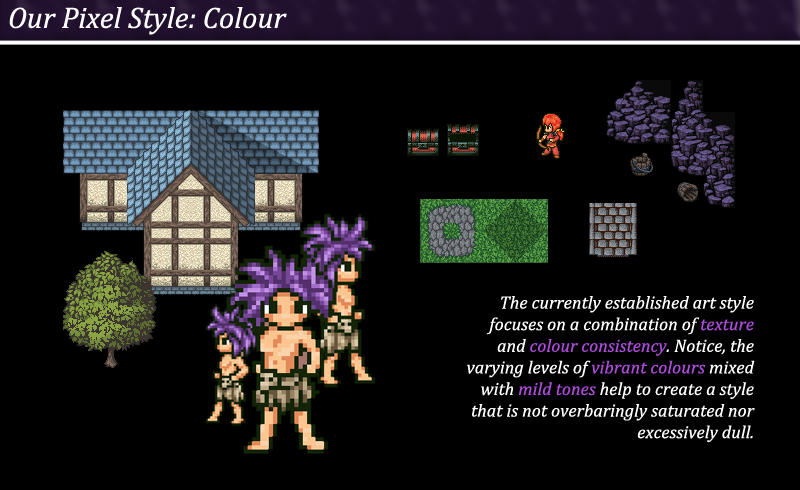 The rest of the Primer and the full article can be found here:
http://elysianshadows.com/dev/project/b ... now-public
Elysian Shadows - "Next-Gen" 2D/3D RPG coming to Sega Dreamcast, Steam, OUYA, and Smartphones

Screenshot from our first town... I'll just leave this here. It's a salute to Chrono Trigger.