A forum for news and discussion about Beats of Rage and its modification.
Post Reply
11 posts • Page 1 of 1

Avengers: United Battle Force is a game I am working with OpenBOR engine (something I advice every mugen creator to take a look), a tad based on the Arcade game plus some new stuff.

This game started as a study case from Doom, who worked with me on Bullseye, so he could learn how to code for OpenBOR. Then it turned into a full game. Basically, Doom edits the chars and starts the codes, and I handle all the core codes and some sprite edits. The idea is to make an Avengers (though some non-avengers chars will appear) based on the old Arcade game, which we loved so much, but won't be a perfect copy.

The title is a working title, and can be changed later. Features (not everything is avaliable yet):
- 2 players
- Specials and air specials
- Hyper moves (consumes all the powerbar)
- Vehicles
- Traps, plataforms, holes and other beat em up things
- NPC chars
- Unlockable chars
- Alternate routes
- While I am a rookie on OpenBOR coding, I promisse to be a cool game to play

What could be done:
-Weapons system, if I manage to code it well.


Roster (subject to change):
the following are completed ... though perhaps we add or modify something ...

Those characters are in progress ...

I think also is in progress Iron Fist and Storm...

Some which could appear, as a playable or NPC
- Wasp
- Fantomex
and some others If you wanna help us with sprites, drops me a line

Really nice. I love mods with small sprites. Much more fun than mods with KOF-sized characters.

oh, and Welcome to DCEmu

Thanks. In fact, I was registered here since long time but never replied.

After some really hard work, we are proud to present you the first demo of the project Avengers United Battle Force. Avengers United Battle Force was made using OpenBOR engine. Everything started as Doom's pratice project, so he could learn how to work with this new engine. After some time, he had invited O Ilusionista to join him and...everything got bigger and now its a full project.

The idea is, somehow, to pay a homage to the original Arcade game called Captain America and the Avengers, which every of us loved when was a kid, but with a new interpretation. All kudos to Data East and Marvel for the original game!

(But guys, seriously, that game has a LOT of size errors... Juggernaut has almost the same size of Iron Man? No way. And why the hell he would use a bazooka? The guy IS a bazooka himself, lol)

While we use some gameplay from the original game, we added many things:

- At least, 2 special moves per char. Some chars have more moves.
- Each char is unique in some way: They have different values for life, attack, defense, power, speed and range.
- Some chars have passive skills (like regeneration), some have unique skills (like fyling mode).
- Breakout move (for dangerous times), rise attacks
- Unique AVENGER POWER per char, like a Desesperation Move. Consumes all the power bar but does a lot of damage.
VIDEO PREVIEW

PC download here: http://brazilmugenteam.com/avengers
Works in Android if you have the app version of OpenBOR, just copy the "avengers.pak" from the PAKS folder


This is a technical demo, so bugs can occur. Please, inform any bug you find!

Had a little trouble getting block to register, I would just get the special in some situations.

I really like the combos and how you can "break" them with a special.

Keep up the good work!
Top

Looking excellent, really. Do you know if this will work on the current Dreamcast port of the engine? (I'm a bit out of the loop here)
Insane homebrew collector.
Top

Do you know if this will work on the current Dreamcast port of the engine?

This looks prett damn amazing. I love the oldschool look of the genesis Avengers game (and some of the sprites used). I used to play that game non-stop.

Christuserloeser wrote:Looking excellent, really. Do you know if this will work on the current Dreamcast port of the engine? (I'm a bit out of the loop here)

I doubt it will be compatible, since the DC version is very old...

Hey guys, here is a small preview of Namor and some new stuff from the game.
Namor can do a great damage, has some scripted slams and will have more moves soon.
His dash move has an automatic followup, but the finisher is optional as cost more mp.

The jumping slam is a special move which needs to be done while grabbing and costs mp too. All the others are normal throws. And what about this Human Torch?

Hey, we got featured here: http://www.rom-game.fr/news/1114-Avenge ... lence.html that is pretty cool

To celebrate Father's Day, which was yesterday here in Brazil, I decided to record a video with my son Enzo. Being able to play the game I made with my own son is priceless

Me - Wolverine. Enzo - Other chars. 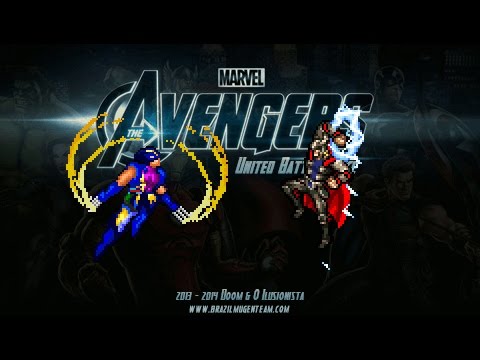 The gameplay shows the first 2 stages. Some things are subject to change.

Return to “Beats of Rage Development”