The Dreamcast Real Power [pics and videos inside] [+update]

Discussion of topics related to licensed games, software hacking/modification, prototypes, and development kits belongs here. Includes topics related to emulating the Dreamcast console on your computer or on another gaming console. Discussion of Reicast should go in the Official Reicast Forum.
Post Reply
356 posts

5555 views is it a record ?
3d graphics and visualization ?
http://www.arquiteturadigital.com
Top

Well I know a topic over at an other forum with more than 8000 posts which is almost spamless and hardly ever went off-topic. It lasted for more than 2 years

You feel at ease as you flock with the masses,
What do you see with your heads in their asses?
Keep on railing at what I believe,
Call me insane and I am proud to be.

Hot Girls Thread got so big it broke the forums. I think it wins.

The Dreamcast could have pushed a lot more power if it had even slightly more hardware. The CPU itself could push about 12 million poly's per sec, but the reason it never did was because the bottleneck was the PowerVR which I believe could only render around 5 million max. had the PVR2 been even 50MHz faster, it could have raised the entire system's effective power by at least 15-20%. As they always say, "You're only as fast as your slowest counterpart."

That, and 32MB of RAM would have been way less taxing on programmers to compress the data, and load times would be faster. Increased flexibility would have made it easier to make shiner and purdier games.

Morphv2 wrote:The Dreamcast could have pushed a lot more power if it had even slightly more hardware. The CPU itself could push about 12 million poly's per sec, but the reason it never did was because the bottleneck was the PowerVR which I believe could only render around 5 million max. had the PVR2 been even 50MHz faster, it could have raised the entire system's effective power by at least 15-20%. As they always say, "You're only as fast as your slowest counterpart."

That, and 32MB of RAM would have been way less taxing on programmers to compress the data, and load times would be faster. Increased flexibility would have made it easier to make shiner and purdier games.

Of course, in '98 when the system was released, that would've increased the price a good deal. Trade offs.
Very sexy hero, omg
Top

Well, I would have paid the extra 50 bones or so for those extras. Would have been money well spent.

(starts planning a GPU overclock and some RAM piggybacking)

Morphv2 wrote:The Dreamcast could have pushed a lot more power if it had even slightly more hardware. The CPU itself could push about 12 million poly's per sec, but the reason it never did was because the bottleneck was the PowerVR which I believe could only render around 5 million max. had the PVR2 been even 50MHz faster, it could have raised the entire system's effective power by at least 15-20%. As they always say, "You're only as fast as your slowest counterpart."

Every single account, as well as all the experience I have ever had is to exactly the contrary. The PowerVR chip is vastly more powerful in proportion to the SH4.
"When you post fewer lines of text than your signature, consider not posting at all." - A Wise Man
Top

Hm, 5 Mio polys per second with all effects turn on isn't that bad

Gameholic wrote:[...]So i think if the Dreamcast had developer support untill now, we would have seen more advanced games ofcourse, in terms of graphics.

Some of my friends saw me playing Headhunter last week; they even told me that the graphics of GTA 3/Vice City weren't much better than Headhunter which is released in 2001.

I think if G.rev would release another Dreamcast game, it would be close to what a 2nd generation Dreamcast game might have been. They made four NAOMI games, did the IKARUGA engine for Treasure and already made Border Down for Dreamcast, so they're probably more expierenced with NAOMI/Dreamcast hardware than any other of the smaller independent companies still active developing for it.
Insane homebrew collector.
Top

No offense to you Quzar m8, but heres the link I got the info from:

You should know I don't makea claim without backing it up. Thats just lame and overly tacky.

I was wrong aboutt he exact numbers, but the bottleneck is still the GPU

Morphv2 wrote: ... numbers, but the bottleneck is still the GPU

Not true. That document is based primarily on memory constraints, rather than actual processing.

Overall, dreamcast is a balanced system, but an objective comparison of each subsystem's performance would reveal that the PowerVR is most efficient.

Those numbers do not take into account the fact that PowerVR requires all polygons to be in memory. It is a "requirement" not a "bottleneck". If the SH4/bus cannot meet this requirement, then "it" is the bottleneck. A game aiming to push millions of polygons would begin to slow down before rendering.

The sh4's task is not to deliver polygons, it is to handle physics, ai and other game tasks and then "generate" polygons based on these. When people say that the sh4 can render 10 million polygons, what do they mean? Will it blend, fill, texture, clip, hsr..... We don't know what tests they performed to come up with that stat, but we "do" know what someone's talking about when they say the PowerVR can render 3 million polygons.

Such "numbers" are not in favour of PowerVR. PowerVR has to dumb itself down to the level of comparing stats as "polygons per second". If you read the PowerVR docs, they call their architecture "pixel processing" rather than "polygon processing" This means that you might send 100 000 polygons and the PowerVR will determine that only half of those are worth rendering. In such a case, would you say the PowerVR has rendered 100 000 polygons? That's what you sent to it, but it only rendered 50 000! They (PowerVR) say most games have an average overdraw of 3, so if we did our own rough theoretical benchmark (like the one at segatech) then we could say that to fairly compare polygon counts, we need to multiply the PowerVR figure by 3 = 7 * 3 = 21 million effective polygons per second.

Most graphics engines/libraries today are tailored to the "brute force" rendering approach. If there were libs/engines tailored to the PowerVR, then its performance would be much higher.

Since the numbers are comparing the sh4 to the PowerVR independently as opposed to their role inside Dreamcast, then it is worth noting that the sh4 is running at 200 mhz and the PowerVR at 100 mhz, so another rough theoretical benchmark would result in double the number of polygons per second for a 200 mhz PowerVR2DC. In this way, we can conclude that the PowerVR will match (and probably exceed) the sh4 because the main memory runs at 100 mhz. In fact, the sh4 would be slower because we would be programming it manually as opposed to the PowerVR which is running a hardwired, optimized program processing polygons optimally structured in ram, optimally utilizing its cache etc etc.

Overall, though dreamcast is a well balanced system and most "bottlenecks" can safely be attributed to "not optimized for dreamcast" rather than "hardware not powerful enough"

Finally, to really make a fair comparison, you need to ask yourself "after all physics, ai, io, etc has been performed, would I be able to do a single one of the PowerVR's rendering tasks and get better frame rates, better graphics?" The answer to this on Dreamcast is "No! The PowerVR has fulfilled its task of offloading rendering and done a damn good job of it."
behold the mind
inspired by Dreamcast
Top

has anybosy seen this game on game cube... the graphics look like it's wrapped with plastic or something 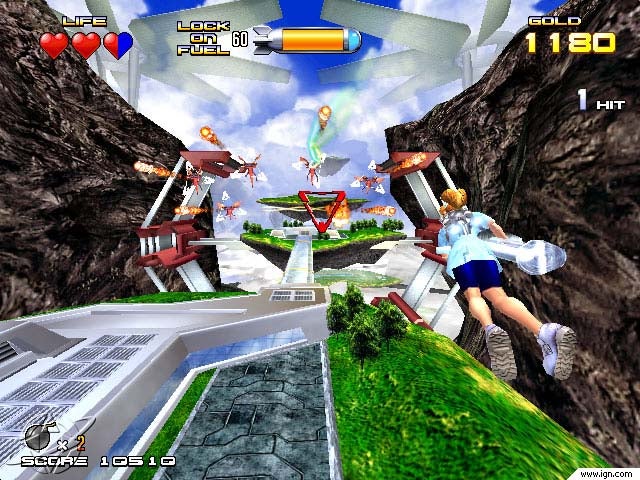 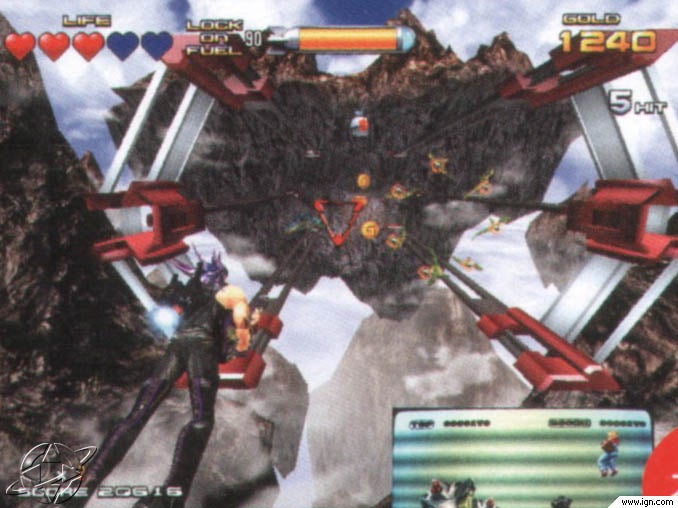 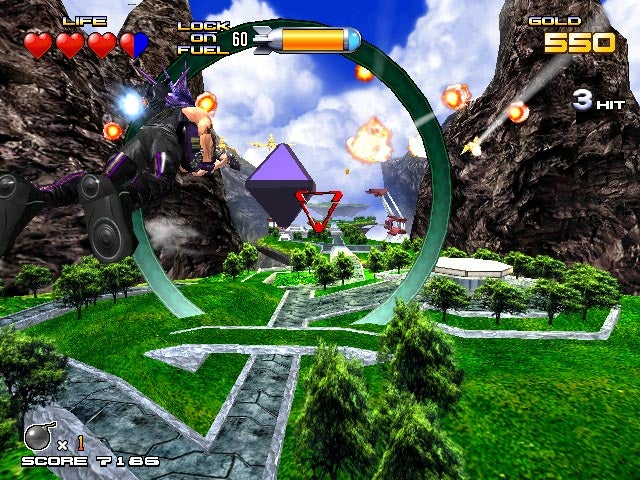 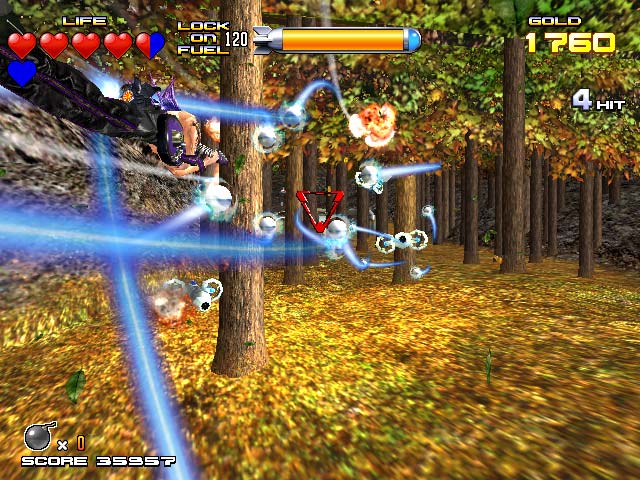 I would post screenshots of hte SA 1 opening FMV, but the interlacing messed it up when I recorded. I need a better program.
Top

the graphics of planet harrier do not impress me and do not show any power of dreamcast.

Planet Harriers was in the works for DC???
Those pics are from the arcade I think...
Top

Juan wrote:Planet Harriers was in the works for DC???
Those pics are from the arcade I think...

Look at the ign link at the bottom
Top

was this game released? I can't find any information on gamefaqs

From the Under Defeat thread...

Still shots don't do it justice... the sparks, explosions, smoke, and all the attention to details look stunning in motion!
Lines join in faint discord and the Stormwatch brews
. . a concert of Kings as the white sea snaps
. . at the heels of a soft prayer
. . whispered
Top

Nick wrote:The last two were essentially an answer to all the PS2 hype at the time.

To answer the question at hand, Did the Dreamcast's Power Get Used 100%? No. Reports were that it could potentially render up to 8 million polygons with the correct programming. Most games only pushed up to around 3-5 million, tops. And this was in the best of the best graphical releases for the DC.

I think, if the system was still in production, and developers were still making games for it--big name games, with millions of dollars going into them--they would be comparable to what the best of the current gen has to offer.

I seriously doubt it would compare to the Xbox 360, but seeing the junk that has been released lately cross platform I say it would handle them fine. Get sick of game companies making games with obsolete technology so they run on the PS2 instead of designing them exclusively on Xbox or Gamecube.

Although really I haven't seen too many graphically impressive games on the Xbox. The best looking (graphics wise of course mind you) games I have seen have been Gamecube games such as Resident Evil 4, Metroid Prime, etc.
Top
Post Reply
356 posts